So, how does it actually work, the DR-2s sound engine? Let's pop the hood...

For each of the 6 instruments, a 'model' or 'algorithm' can be chosen. There are models for bassdrums, snares, claps, cymbals, ... For every drum sound we wanted to create, we searched for the best recipe to create that sound. Complex enough to keep it interesting, simple enough to keep it controllable. For some sounds, a single oscillator and some filtering works perfect. For other sounds, many more oscillators are used, with adaptable tuning ratios, or with extra filtered noise sources, special filter algorithms, or ... 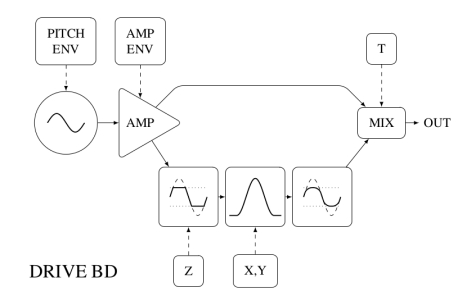 Let's look at an example: the Drive BD, a relatively simple model. Sound is created by a sine wave oscillator that has a pitch setting and a pitch envelope, controlled by the PITCH, (pitch) DECAY, (pitch decay) CURVE and (pitch env) AMOUNT parameter knobs.

The output of this oscillator then passes through an amplifier, controlled by the (amp) DECAY and (amp decay) CURVE parameter knobs.

This second path makes it possible to select a certain frequency to add some extra harmonics to the bassdrum sound. From soft and subtle to hardcore overdriven.

modeldrive.mp3 // The Drive BD, first 'clean' without the distortion path, moving the pitch settings. Then with distortion, playing around.

Another example: the cowbell. The cowbell uses 18 sinewave oscillators tuned to the main (in)harmonic frequencies of a cowbell sound. With the Z parameter knob the mutual frequency ratios of these oscillators can be controlled to change it's 'character'.

After mixing the 18 waves together, there's a lowpass filter, in case you might need it. It's frequency is controlled by the X parameter, modulation with a short filter envelope by the Y-parameter.

Next to that, there's also a short white noise 'burst' that can be added to the beginning of the sound, mimicking the noise of the drumstick hitting the cowbell. It's length is set with a noise envelope, controlled by the T parameter.

modelcb.mp3 // We could use a little more cowbell here ... 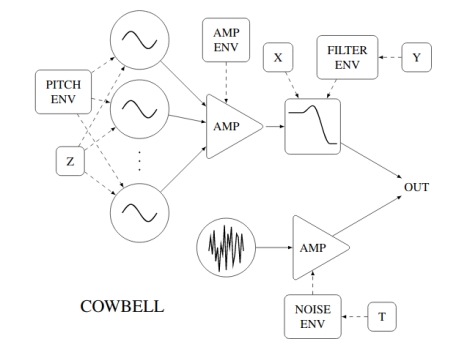 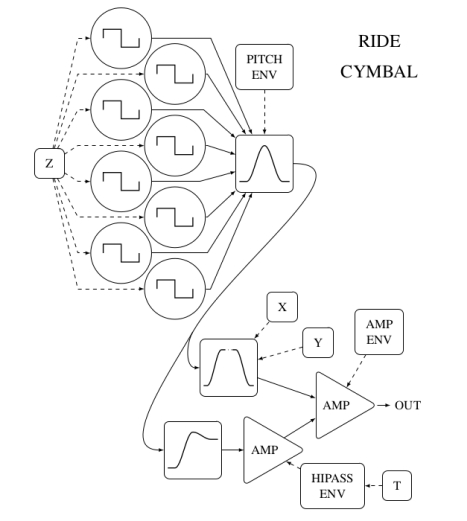 And finally, a more complex example: the ride cymbal. It uses a so called 'cymbal noise' source.

Cymbal noise is created by mixing together 8 square oscillators that have mutual unharmonic frequency ratios. These mutual frequency ratios can further be altered using the Z parameter knob, to change the character of the cymbal noise.

The cymbal noise then goes through a first, relatively broad bandpass filter, the frequency of which is controlled by the pitch settings.

Then, the signal is split in two parts. The first part goes through a bandpass filter that has a frequency (X parameter knob) and bandwidth (Y parameter knob) setting. This filter internally has some so-called non-linearities that add even more unharmonic frequencies to the mixture.

The second part is a highpass filter that adds an initial bright 'ting' at the beginning of the drum sound. It is routed through an amp stage with a shorter envelope, controlled by the T parameter.

This model can produce both more or less realistic sounding ride cymbals, and rather weird sounding cymbalesque noises, especially with wider bandwidth settings.

At this time, there are 15 of those models in the DR-2, and we have some room to add more in future firmware upgrades. Read everything about all of them in the user manual.