And then, there's a number of smaller additions and improvements:

We implemented a so-called tilt filter, to adjust the balance between high and low frequencies. That needs a little explanation...

Every channel has its own tilt filter, controlled by the SHIFT + Y-knob. This filter does some kind of final equalizing to put a drum sound better in the mix, stressing the higher or lower frequencies. It has an adjustable slope from +6dB/oct to -6dB/oct. That doesn't seem very steep, but it's applied over the entire range of audible frequencies from ~20Hz to ~15kHz. Thus the tilt filter has no cutoff frequency where its influence starts.

The tilt filter's sound is not *very* spectacular, it is not an overdriven resonant 24dB feedback-modulated multimode filter or something, but it is absolutely a useful tool to give each instrument a specific place in the mix, frequency-wise.

Together with the brand new overdrive and the compressor, our 'after treatment' section is now complete. After the drum synthesis by one of the 17 models, every instrument gets a treatment by its own separate:

And then there's that new bassdrum model... Two important aspects may need a little explanation:

A certain moment, it became clear that the existing bassdrum models of the DR-2 weren't able to reproduce the BD sound of certain vintage drum machines. It always kept sounding a bit 'artificial' in comparison. Very useful in numerous circumstances, but sometimes lacking a certain little something...

So, we tried to investigate what that something might be, and found out that many analog BD drum sounds contain a small amount of even harmonics, although they shouldn't. Most BD sounds are built out off somewhat distorted sine waves, triangle waves or square waveforms, and all these waveforms have in common that they theoretically contain only odd harmonics of the base frequency. A long mathematical explanation why, but that specific property leads to a left-right symmetrical waveform. Triangle and square waveforms have a symmetrical form and contain no even harmonics, a sawtooth waveform is not left-right symmetrical and has a lot of even harmonics. 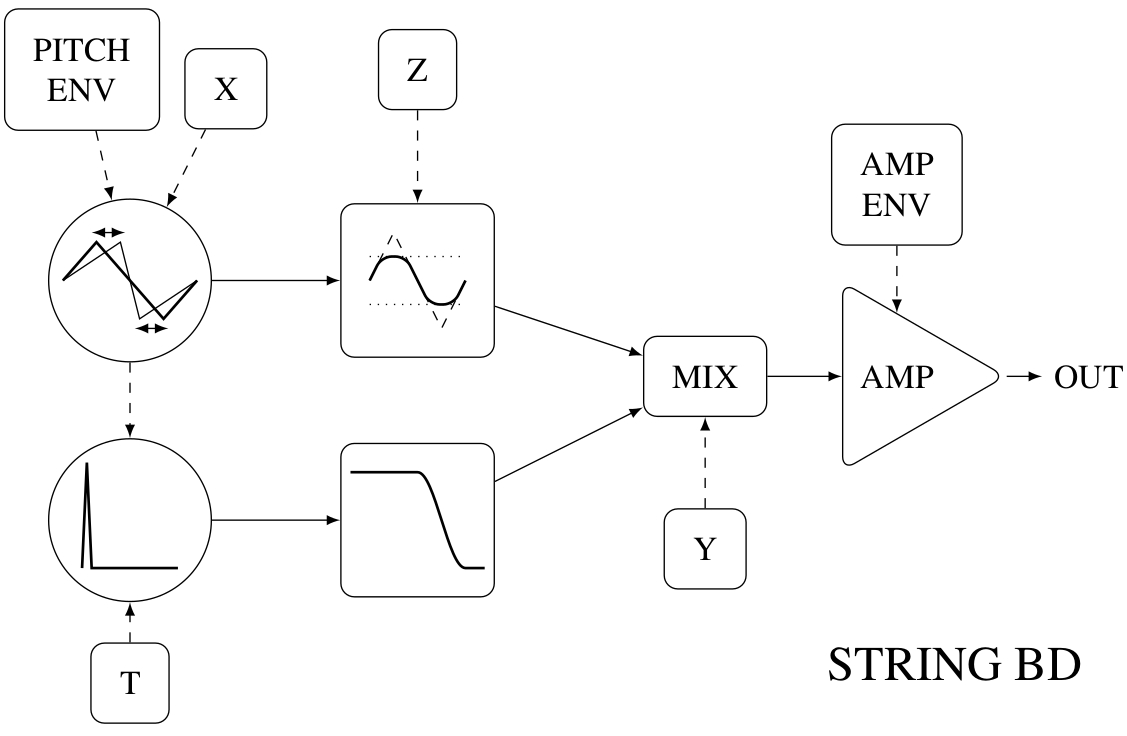 But, analog electronics are rarely theoretically perfect. So probably, little imperfections in their BD synthesis circuits may lead to a certain asymmetry in the generated waveforms, and thus to a small amount of even harmonics, subtly coloring its sound.

So that's a first aspect of the String BD drum model, it has an asymmetry parameter that controls the amount of even harmonics. The X-knob controls the asymmetry of the generated triangle waveform, that next passes through a soft drive stage that 'rounds the corners'.

Next to that, the String BD model also has a snare ! Sometimes, on ethnic instruments, you see some kind of wire or string stretched over the head of a tambourine or drum. This wire makes a buzzing or rattling sound along the drum head sound.

Without trying to realistically mimic any ethnic instrument, this principle inspired us to do something similar. Whenever the waveform of our new bass drum model passes through zero a little tick is generated, as if a moving drum head hits something when passing its rest position. There are 2 parameters to adjust this sound: 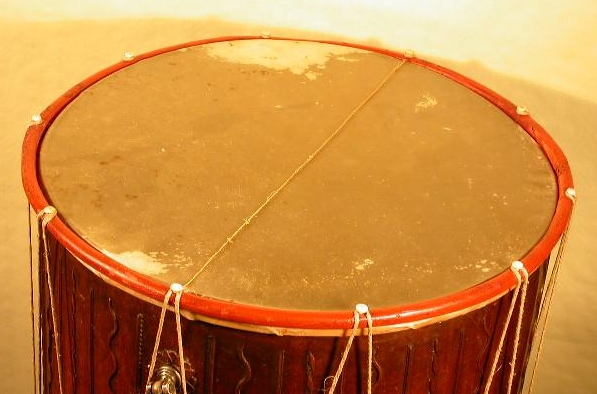 When every tick of the string is sounding identical, this is going to sound more or less like a very narrow pulse waveform, not like a rattling string. With a certain degree of randomization, it sounds more irregular and 'buzzing string'-like.

The string sound is finally sent through a lowpass filter that removes most of the very high frequencies above ~8kHz. The result of that is finally mixed with the oscillator sound.