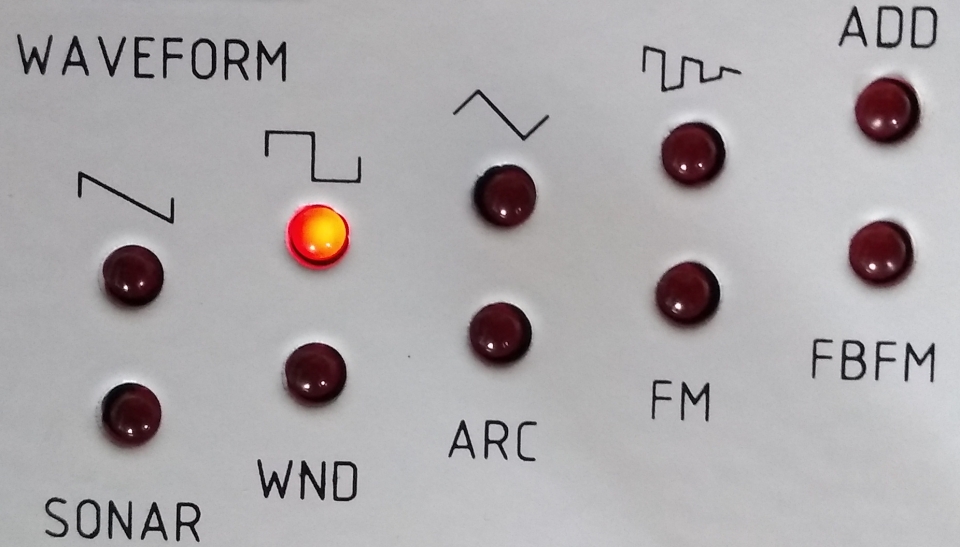 In our search for innovative sounds, we wanted to add new waveforms to the classic three: sawtooth, square/pulse and triangle. We wanted to explore new sound creation possibilities in the oscillator section of the classic (virtual) analog synthesizer. And we think we succeeded...

We wanted to give our oscillators new 'waveforms', as a lot more of the character of a synth lies in the oscillator section than usually told. But we had to admit very soon that the classic three: sawtooth, square/pulse and triangle are not for no reason the ever returning classics. They are the basic building stones of a vast number of possible synthesizer sounds. Trying to make other wave'forms' is very unrewarding, and we tried a lot of them! Circular formed waves, sawish pulse forms, peaks, triangles, tilting squares, pentagonal or hexagonally morphing geometric stuff... They all start sounding like a mix of bad imitations of the classic three. Very innovative, but it just doesn't sound good.

We realized that there is a large open space in creating sounds that have a certain 'grain' or roughness in it. The most beautiful singing voices, or the most fascinating genuine instrument performances often contain a form of noisy speckled special 'character' in it. And that is where classic synthesizers fail.

Just adding a drop of white or pink noise is not sufficient to achieve this. Some synthesizers in the late '80s and early '90s made a certain approach to this by adding some recorded looping 'waves' of choirs and windblown things to add to your sound, but they are and they sound like nothing but static recordings. Probably also due to the impossibility of programming synths of that age, with their over-complex menu systems and very limited data controls, they just disappeared again a decade later.

We created three noise 'waveforms' that are not recordings of some noisy sounding stuff, but real-time sound creation algorithms. Here are examples of each of them. You can hear they don't sound too well on their own, but they are made to be layered with the other oscillators to create grainy sounds.

sonarnoise.mp3 // Sonar noise: This creates a resonant bandpass-filtered noise, of which the resonance parameter can be adjusted.

windnoise.mp3 // Wind blown noise: This makes a comb-filtered form of noise, with the possibility of further removing some of the lowest frequencies.

arcadenoise.mp3 // Arcade noise: This is a recreation of the noise creation algorithms of former arcade video games' sound chips, such as the SID or the SN76489.

We also added two FM-'waveforms', which are 2-operator blocks as found in the classic FM-synths. This enables you to add very typical FM-synthesis elements.

In both algorithms it is possible to set the carrier: modulator frequency ratio, using the FM CARRIER and FM MODULATOR buttons. These FM-waveforms are not really innovative, as FM-synthesis already existed before. But the combination of FM-elements in a typical Virtual Analog-setup proofs to be very interesting and expands the domains of both FM- and VA-style synthesis. And what's more: the classic FM-synths also proved to be incredibly tedious to program, with almost no sound editing controls on their front panels, and extensive menu systems. Which made them also disappear after a decade. This is implemented way easier in the Modor NF-1.

A last innovative element in the oscillator section is the additive oscillator. In this oscillator basic sine harmonics are added to each other to create waveforms with unusual harmonic combinations. You can choose their separation to be 1x or 2x the base frequency, creating waveforms containing all or only the odd harmonics such as in saw- or square-waveforms. But you can choose also 3x, 4x ... 16x the base frequency, with the additional possibility of choosing the first, second, ... eightest harmonic to start from. It gives you the possibility of enhancing or adding a certain harmonic or to make unusual combinations of harmonics.

twinkels.mp3 // In this example, you first hear an atmospherical pad playing some chords. After that we hear the same chords with the separate elements one by one. First some 'twinkling' by the additive oscillator, secondly an FBFM-oscillator and finally an overlay of wind noise. Not exactly a type of sound you'd expect from a virtual analog synth ...